SPIRIT: STALLION OF THE CIMARRON fans have always been waiting for a sequel to DreamWorks' 2002 masterpiece. So far, we did not get the anticipated second movie. But on May 5th, 2017 aired the first season of SPIRIT RIDING FREE, a Netflix-original series based on the original SPIRIT movie. The series got mixed reactions; lots of original SPIRIT fans cast the series out, but it gets enthusiastic reactions from newer, younger fans around the world.

SPIRIT RIDING FREE (2017-2019) has 8 seasons with 6 to 7 episodes each. Every episode has a running time of approxametly 23 minutes. SPIRIT RIDING FREE: PONY TALES (2019) is a mini-series with two collections. The first collection consists of six special short episodes, comprising two music videos and a four-part story. The second collection consists of four full length episodes. SPIRIT RIDING FREE: RIDING ACADEMY (2020-) is the ongoing sequel of Lucky and her friends, based on the 2017's series. It now has 2 seasons, with 7 and 9 episodes each. There has been a Christmas-special (2019) and an interactive special (2020). Several promotional webisodes were released on the DreamWorksTV YouTube channel. A feature film based on the series, titled SPIRIT UNTAMED, is scheduled for release on June 4th, 2021. 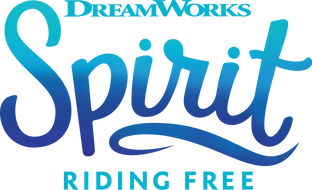 SPIRIT RIDING FREE is about Fortuna 'Lucky' Esperanza Navarro Prescott, a 12-year-old city girl who moves to the Wild West countryside with her father and aunt. They settle down in the humble village Miradero, where Lucky meets all kinds of new people - and animals. It is in Miradero where she first meets kiger mustang Spirit (or Spirit Jr, son of Spirit); she immediately bonds with the stallion. Lucky also befriends two other girls, Prudence 'Pru' Granger and Abigail Stone, with their horses Chica Linda and Boomerang.

"SPIRIT: STALLION OF THE CIMARRON" is copyright by DreamWorks, 2002.
This website is in no way affiliated with DreamWorks.
​All pictures and content belong to their respective owners.​